I'm watching California Dreamin' (The Mamas and the Papas) on Ch. 9 and just had to dig out my Forest Park High School yearbook. Mama Cass is on the Cohen page. I knew her as Ellen. This is what I remember: When she came over to Baltimore from Washington, D.C., I think when we were in the 11th grade, she had been in Sigma Pi Sigma, a high school sorority; now she walks into Upper Park Heights and the girls at Forest Park won't let her join their snotty Baltimore chapter.

The Cohen under Ellen's picture also died young. I think Ellen died first. Marsha was a beauty queen and acrobat and our prom queen. I knew her from 7th grade on. She smiled maybe twice that I can remember (although she made Phi Delta); whereas, Ellen smiled, joked, sang and laughed all she could.

This was the Forest Park High and Baltimore of Barry Levinson's Diner, a much different place for teenage boys than for teenage girls (at least the girls I knew), but not a paradise for any of us. 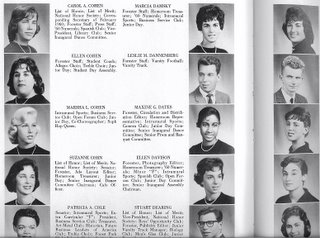 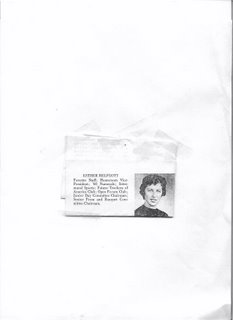 ....and we all wore pearls.
Posted by Esther Altshul Helfgott at 8:01 PM 7 comments:

"In my healing arts writing groups we find a space for confidence- building and community formation, a place where self-esteem and courage blossoms. Here we come to look at our lives and celebrate ourselves and each other.

"My goal is for us to find a place of strength and non-marginality. No one is on the edge here, on the outskirts looking in. We are all, each one of us, smack in the middle of experience and knowledge that we lend to each other -- through non-competitive discussion, writing, and sharing of work, if and when we are ready.

"We use writing, mostly poetry, to trigger imagination, memory, friendship, love, hate, ambiguity, fear, whatever comes along, even secrets we didn't know we had.

"My goal is for us to use writing to discover our authentic voice(s) on and off the page and to develop the confidence to use our voice(s) with determination.

"I am most concerned with writing process and writing as process; and though we work toward making our words clearer for others to understand and to understand ourselves better, worldly (or wordly) success is not an ingredient of the healing arts space, all the while we take pride in our accomplishments and in each other's accomplishments.

"Here in my healing arts writing groups, we listen to each other so we can hear more of ourselves; and we quiet ourselves so we can hear that much more of all those others who share our writing/living spaces with us."

If you are a cancer patient, recovering cancer patient, caregiver, co-worker, relative, friend or acquaintance of someone with cancer and would like to join us, please call Cancer Lifeline at 297-2100 or visit on-line.

The time will come
when, with elation
you will greet yourself arriving
at your own door, in your own mirror
and each will smile at the other's welcome,

all your life, whom you ignored
for another, who knows you by heart.
Take down the love letters from the bookshelf,

the photographs, the desperate notes,
peel your own image from the mirror.
Sit. Feast on your life.

You Have to Be Careful

You have to be careful telling things.
Some ears are tunnels.
Your words will go in and get lost in the dark.
Some ears are flat pans like the miners used
looking for gold.
What you say will be washed out with the stones.

You look for a long time til you find the right ears.
Til then, there are birds and lamps to be spoken to,
a patient cloth rubbing shine in circles,
and the slow, gradually growing possibility
that when you find such ears
they already know.

"You Have to Be Very Careful" from Words Under the Words: Selected Poems by Naomi Shihab Nye. Copyright © 1995.
Posted by Esther Altshul Helfgott at 9:13 AM 1 comment:

“Paper Bag” from Mud, Moon and Me by Zaro Weil
copyright © 1989 by Zaro Weil
Posted by Esther Altshul Helfgott at 9:08 AM 4 comments:

I will dwell
where I am
and use
what is
in me
to remember.

I think the above, Nov. 09, '05 diary-entry, will be my last for awhile on Alzheimer's, at least to publish here. The disease is taking its toll, and I must move my writing and thinking forward into other spaces, all the while I continue caring for my husband (at home) and interacting with this nightmarish disease.
Posted by Esther Altshul Helfgott at 1:56 PM 1 comment:

After two weeks
of sleep
deprivation
for both of us
I give him the Ativan
and get a whole night's sleep.
(Well, almost).
And so does he.
(Well, almost),
but he wobbles in the morning.
(At least).
And getting up from a chair
is har
der.
And in adult care
he sleeps,
so they'll
keep him there.
Until
I pick him up
and night
begins
again, as day
doesn't.
Posted by Esther Altshul Helfgott at 5:08 AM 3 comments:

I didn't know he
was my shul
my language
my mother tongue
and prayer
the zeyde I lost,
and bubbies
I never had.
Or that he was my homeland.
And exile.
My nakedness.

I didn’t know
when I met him
twenty five years ago
that I had needed
a place to
dwell
in.
Or that knowing
turned less
into more
And more
into
less.

Oh,
where
shall I dwell
when he’s
gone

Where
shall
I
when
he’s

As I Sit In Class

I think of him
wanting
to come home,
how I pinned
my business card
to his undershirt.
On the back
I wrote:
You're in Adult Day Care.
I'm going to class.
I'll pick you up
at 1:30 p.m.
He reads the words
with me. I kiss him
goodbye,
give the nurse
a plastic baggie
filled with tylenol
and a just-in-case Ativan.
In class,
Jeanne, Mary
and I
write
and talk
about writing.
We read Bill Stafford's
What's In My Journal
while my first cell phone
sits unringing
but ready
on the desk by the door.

The Fall 2005 issue of American Imago came in the mail this weekend. It's an important compendium of essays on various forms of imprisonment. I am pleased to say that my essay, Analytic Entrapment , concerning my psychoanalytic experience is included. I thank Peter L. Rudnytsky, editor of American Imago and Murray M. Schwartz, guest editor, for their important comments while the essay was in progress and for the integrity they demonstrate in printing an essay from the analysand's point of view.

The essays can be accessed through Project Muse at any university library. In Seattle, at Suzzallo, our wonderful librarians (I adore librarians. How would we live without them!)on the periodicals floor will offer you a friendly hand.

Book Reviews
Schapiro, Barbara A.
The Death-Ego and the Vital Self: Romances of Desire in Literature and Psychoanalysis (review)

Sharon-Zisser, Shirley, 1962-
The Cambridge Companion to Lacan (review)
as per American Imago
Posted by Esther Altshul Helfgott at 10:52 AM No comments: