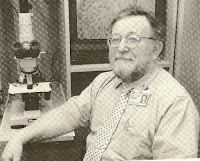 Ted Bundy was walking his last walk,
and Abe had his ear glued to the radio.

I walked passed him in a huff

that he cared so much about the life
of that killer
of women.
My stomach turns remembering the news
of Bundy biting off women’s nipples
before killing them.
In 1974, I’m walking
to the parking lot
after school lets out.
It’s dark and Bundy's
said to be in Bellingham,
where I’m a student at Western.
I’m afraid to walk to my car.
I ask another woman if she'd watch me
and then I’d watch her. But she scoffs, says:
Bundy’s not here. He won’t get you.

And another woman is killed.
And still another.

The woman had laughed,
and I wondered how she lived
without the fear of men
mutilating women:

A teenage girl bludgeoned to death in Patterson Park,
my neighborhood, East Baltimore, 1946.
Is this a screen memory?

I’m five years old. An eleven-year-old, Marsha Brill,
is knifed to death, July 6, 1948. I’m seven.
This is not a screen memory. The event is captured
in newspapers across the country,
including the Baltimore Sun. The man was executed.

An eleven-year-old girl is hammered to death
in the basement of a tropical fish store.
Again, my neighborhood, Northwest Baltimore,
September 29, 1969. Her name was Esther.
This man was not executed.
He was white.

How do women grow up unafraid?

When Bundy is finally dead,
January 24, 1989, I breathe a sigh of relief,
go back to our bedroom.
and sit down next to Abe
who is crying.
Posted by Esther Altshul Helfgott at 12:48 PM 2 comments: