The poor and black are in Iraq.
Which is better,
there?
Or, on a roof top
here
(in New
Or-
leans)
?

Good for Slate magazine's Jack Shafer for pointing out the inadequacies in our media's reportage.
Posted by Esther Altshul Helfgott at 9:35 AM No comments:

I've been spending the last few days with Patricia Bosworth's biography of Diane Arbus (1923-1971), accessible and, from her point of view, honest. Bosworth was the daughter of Bartley Crum, one of the six lawyers who defended the Hollywood Ten. He was ruined, as those he defended were, having named names of two of the Hollywood Ten's defense lawyers; he committed suicide in 1959.

Patricia Bosworth's life was defined by her father's work and she, her mother and brother (who also suicided), suffered from his long absences. But Patricia transcend family hardship. Her father always taught her that she could do whatever she wanted. As a child, she modelled for the Diane and Allan Arbus Studio. As an adult she became a free-lance journalist and eventually a biographer, writing about those whose lives she, in some way, identified with, including Monty Clift, Marlon Brando and Arbus.

I like Bosworth's style. Arbus comes alive for me. Bosworth makes me love Diane but then she pulls me into reality to show the photographer's idiosyncrasies and shortcomings, her courage run amuck, along with the drive and talent she developed and used to deal with conflicts concerning sense of self, position in the family as daughter, sister, wife, mother and artist.

Diane Arbus came from a wealthy family. Her mother, Gertrude Russek, inherited her parents' New York Department Store, Russeks, which was eventually run by her philandering husband David Nemerov. Arbus was the sister of poet Howard Nemerov (1920-1991) and the sculptor, Renee Sparkia. She was married to photographer-turned-actor, Allan Arbus.

On July 27, 1971 at age 48, Diane was found in her bathtubm, wrists slit and, as the autopsy reported, filled with barbiturates. She left two children, Doon, now 58 and a playwright and Amy, a photographer, now 49. Allan Arbus, who played the psychiatrist, Maj. Sidney Freedman, in M.A.S.H. is 87 years old.

Although Bosworth didn't get such hot reviews - she's not an academic or an arty writer - so what - she writes a page turner, and I would do well to keep her style and commitment in mind while working on the Buxbaum book.
Posted by Esther Altshul Helfgott at 9:55 PM 1 comment:

Suzzallo, a place of worship

I can't
remember
when it was
the last time
I walked
these stacks.
The smell
of nineteenth-
century
tomes:
the sound
of dark-
ness. The touch
of cracked
leath-
er. The taste.
Up
and down
the aisles
of centuries.
The feel
of dead
people
seeing
me.

Adult day is history. I've hired a couple for in-home care. No more sitting around watching a game of balloon volley ball or interacting with staring strangers. He'll stay home, do what he wants: work at his desk, read, listen to music, think, get out the telescope, feed the dog, sit on the porch, peruse the roof tops and when it's clear as it has been, bask in the rays of The Mountain, nurturing, watchful mountain, Mama and Papa Ranier, hovering ....
Posted by Esther Altshul Helfgott at 7:05 AM 1 comment:

the brain, the powerful brain

On a selfish level, the worst part is not having him to talk to, stopping in the middle of a conversation I’m trying to have with him, a question I'm beginning to ask - what's this bone in the body or that - realizing I’m doing something wrong: taxing his brain.

It's almost the same as when I was seven, sitting at the kitchen table, trying to teach my brain damaged Uncle Benny how to read. But not quite.

He got lost yesterday; now I’m filling in the Alzheimer’s Association’s application for Safe Return.It's already taken an hour.

Why does everything have to take so damned long?
Posted by Esther Altshul Helfgott at 5:47 AM No comments:

no two days are alike

Abe went to Adult Care twice this week and I see light at the end of the tunnel, at least on a daily basis. The Center is just a few blocks from our house - amazingly - and holds a warm loving atmosphere. He is physically and emotionally safe and I am. I was able to go to a doctor's appointment yesterday w/o worry and food shopping by myself for the first time in ages. I hate food shopping - that was something Abe always did - but this time I actually feel as if I am on vacation, both at the doctor’s office and at QFC.

Today’s a different story. He doesn’t want to go. It’s a prison, he says. There are big people there who have you under their thumb. I don’t want him to go either. I don’t have to work today or go for light treatments, so why does he have to go? We can stay home together, just hang out.

But, no, I think, we both need a schedule. He needs to get used to a safe environment without me, and I have to write without him standing over me, and I have to get the car fixed and walk around Greenlake (fat chance), and go food shopping, and read all those books I bought on Alzheimer’s, and go to the library to check on the footnotes for that essay I have to finish.

So I say I think we better get up and go, then I take away the I think, and am sure we need to get up and go and when I’m sure, he becomes so, and gets up from the bed (where he’s massaging my toes), and says ok, I’ll go. Now he’s in the shower, soaping up, and readier for the day than I am.
Posted by Esther Altshul Helfgott at 10:25 AM No comments:

His illness is teaching me how to care for myself and to be concerned about my own needs as well as other people's; this, in quite astonishingly new ways. Most of all, that I have the right to acknowledge the work I do -- at home and outside the home -- in my teaching and writing and other activities. Incredible how little we/I know... in this my sixth decade.

The seond day of Adult Care went splendidly. When I picked him up, got him in the car and asked, how'd it go? , he said: what a dramatic day... Nice people ... are getting ... to know each other. He is physically and emotionally safe: We couldn't ask for anything more.

And oh, did I mention, we have a new grandchild, Little Boy Schweid, 8 lbs. 10 ounces, 21 " long. Abe's first from his own children. I printed the pictures out, hung them on the wall and he sits smiling at them. When one life wanes, another comes along to bring us new pleasure - which we can certainly use at this time - and new hope. He even remembered the name of his first wife today. And mine too - I think. Better go check! Do you believe I can still get jealous! Oh, the human condition: our smallnesses and foibles, at least mine...
Posted by Esther Altshul Helfgott at 8:44 AM 3 comments:

today the first day of adult day care i rush back before the designated time so fearful for the minutes spent away from me and safety. in a round room two more elderly men aware and not aware, smile and don't smile. a younger woman in a wheel chair. a table. an aide. a jigsaw puzzle. abe reads the national geographic, looks up, sees me. he's happy to see me, wondered was i coming back ...
Posted by Esther Altshul Helfgott at 9:38 PM 2 comments: 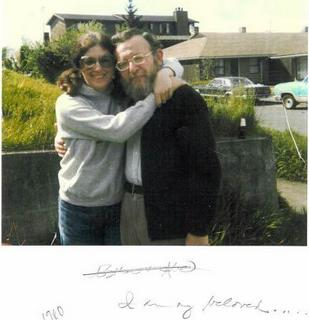 The social worker said: You've never seen him do that before? No. Get used to it. That's what they do.
Posted by Esther Altshul Helfgott at 10:35 AM 1 comment:

the words won't stick to my cortex

I ask him:
What's happening?
The words won't to my cortex,
he says.
Stick?
Yes, stick.
The
wor
ds
wo
n't
sti
ck
to
my
cor
tex
swee
har
t.
Posted by Esther Altshul Helfgott at 8:25 PM 3 comments: