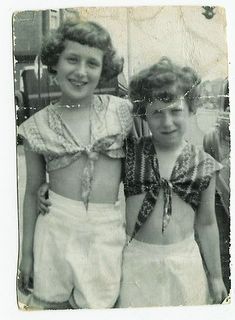 Me & Dot in front of Sussman's Drugstore, next to the tailor shop at 3603 Park Heights Ave,where we lived with our parents and brother. (In back was the kitchen and upstairs were the living room, bathroom and bedrooms). Mother made us these outfits. She liked to dress us as twins. c 1948.

Across the street was Goldberg's with the fruit and vegetable bins out on the sidewalk. Inside were groceries and two pinball machines. Out on the stoop, neighbors whispered that people bet Numbers over there. (I think the police on the beat did).

Three or four doors down was Gottlieb's Cheese shop and down from there, the kosher butcher which wasn't supposed to be open on Sundays so he let everyone in the back door and the cops pretended not to see, probably because they were paid off.

Up the street was the six year old German boy we played with. He owned the one television on the block, at least the one we knew about. His mother let us come in to watch Howdy Doody, but our father didn't like those people because they were German and next door to them was a bubbe with purple numbers on her arm.
Posted by Esther Altshul Helfgott at 8:41 PM